Home » About Us: Maria Zampini

About Us: Maria Zampini 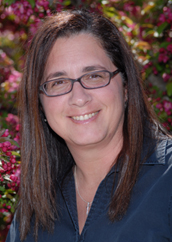 Maria’s first memory of working in the family business is putting fertilizer pills in pots at age seven. Maria worked her way up the green corporate ladder and now represents LCN Selections and other new plant varieties, researching and developing the plants and introducing them to the market. Under her guidance UpShoot has expanded its breadth of work to include marketing of garden related products. Additionally, Maria is also a respected author, speaker and consultant.

In 2012 Maria was named Director of Plant Development for the Agricola Management Group, the exclusive licensee of the HGTV HOME Plant collection. Her work includes sourcing genetics for the various plant collections, working with grower and retail partners as well as networking with garden writers.

Maria writes a monthly column in Garden Center Magazine and a regular column for Nursery Management. Her work has appeared in numerous other publications, including American Nurseryman, Nursery News, Country Folks Grower, Fine Gardening and the northern issues of State-by-State Gardening Magazine. She is also a sought-after speaker, lecturing on new plant introductions, sustainability, native plants, plant patents and trademarks and other plant-related topics.

Before founding UpShoot, Maria was the President of Lake County Nursery, Inc. She ran the 1000-acre nursery, led a staff of more than 250 people, managed the destination attraction retail garden center and oversaw the research and development divisions. Maria also was responsible for the nursery’s marketing and advertising, producing a yearly catalog (known as “The Bible” in the industry), press releases, tags, flyers and other marketing collateral.

Maria has a Bachelor of Science degree in horticulture from Penn State University. She helps guide the industry as a member of the Board of Directors of the National Association of Plant Patent Owners and the Legislative Committee of the Ohio Nursery and Landscape Association. She has previously served as Director of the International Ornamental Crabapple Society and as President of the Ohio Nursery and Landscape Association—the first and only female to fill those roles. She has also been recognized with an Honorarium by the Nursery Growers of Lake County, Ohio.

In addition to her horticulture work, Maria contributes to her community as a member of the Advisory Board of the Salvation Army, Painesville Division. She has previously served on the Board of Directors of Lake Erie College and the Lake County Visitors Bureau.
Click here for more Maria’s resume.

Connect with Maria and UpShoot on the following social media platforms:

Connect with Maria via email:  maria@upshoothort.com.